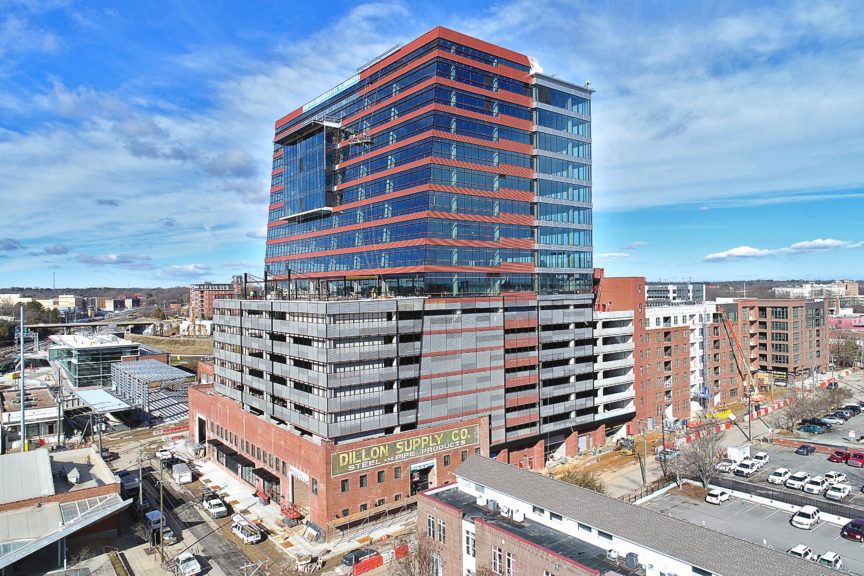 When 17-story The Dillon opened last month in Raleigh’s warehouse district, it revealed itself to be more than a glass- and aluminum-clad, mixed-use building. It’s also the product of an ongoing, collaborative relationship between two prolific Triangle architects.

The work of Turan Duda and Jeff Paine reaches across the South, with tall buildings in Atlanta and Austin, site-
sensitive structures at Duke University, and a new wellness center now in the design phase for Jefferson’s “Academical Village” in Charlottesville, Virginia.

As fellow Durham architect Phil Freelon of Perkins+Will says, their architecture is positive and long-lasting. It’s also rooted firmly in the modern movement. Paine learned about that as a student at Syracuse University, and Duda at the Yale School of Architecture, and prior, from 1972 to 1976, as an undergraduate at the N. C. State College of Design.

Duda began his academic career at N.C. State in a meeting with Dean Henry Kamphoefner, who cast a stern look at the young, wannabe architect. “I’m standing there, and he’s flipping through my portfolio,” Duda says. “He asks: ‘What is architecture?’
“I say: ‘That’s what I’m here to find out.’
“He says: ‘Good answer, but I don’t know if you can handle the academics. If you get a 3.0 in the first semester, I’ll let you in.’
“I got a 3.9,” Duda says. “He says: ‘I guess you can handle it.’”
That was an understatement.

The Pelli Years
Duda and Paine met while working in the New Haven office of César Pelli, who was also dean of the Yale School of Architecture. Pelli Clarke Pelli was, and still is, known for its towering buildings, mostly in glass and steel, around the globe. Among them: the 1975 Pacific Design Center in Los Angeles, the 1988 World Financial Center in New York, and the 1992 Bank of America Corporate Center in Charlotte.

“I was with his firm for 15 years – I wanted to stay as long as I was learning something,” Duda says. “First, Jeff and I worked on the World Financial Center – it was four major buildings and six million square feet.”

Paine had joined the firm two years after Duda, following a stint in Kevin Roche’s Connecticut office, where he’d worked on the John Deere corporate headquarters in Moline, Illinois. Roche and Pelli had a shared DNA – both had worked in Eero Saarinen’s post-World War II office, recasting perceptions of American modernism. Among Saarinen’s projects were the St. Louis Arch, the TWA Terminal at Kennedy International Airport in New York, and Dulles Airport in Northern Virginia. Through Pelli and Roche, the modern aesthetic trickled down to Duda and Paine.

The first Pelli project assigned to Duda was the Winter Garden at the World Financial Center. “It was a great place to start,” he says. “Creating a public room is a great notion that has carried over, even now. It’s a civic act – great places for great cities, but most developers don’t give you that as a programmatic element.”

He and Paine worked together on three projects at Pelli’s firm, the last an aquarium in Mystic, Connecticut. Driving back and forth from New Haven, they found common ground. “We realized we were similar in the way we thought,” Paine says. “As we compared notes, we realized that we could probably make a go of it on our own.”

Duda says he recognized that design talent is not enough to create a successful firm, that an architect with a solid business sense was imperative. “Jeff was one of the top managers in the firm, but also a designer,” he says. “And we trusted each other.”
Screwing up their courage, they walked into Pelli’s office and announced that they’d be forming a partnership and moving to Durham, where Duda had family. “He said: ‘You two make a great partnership, and only make me look better,’” Duda says. “It was a compliment – we burnished his reputation, not just as an architect but as a mentor and an educator.”

Duda|Paine in Durham
By 1997, the pair was making the rounds in the Triangle, introducing themselves to potential clients and architects in the area, and offering to collaborate at the drop of a hat.

They heard of a design competition in Charlotte, a joint venture between Bank of America and Atlanta real estate developer Tom Cousins. Three other well-known firms – Kohn Pedersen Fox, Hugh Stubbins and Associates, and Little – had already been at work for two weeks out of the four-week schedule. “For the next two weeks, we did four master plans,” Duda says. “We knocked ourselves out.”

But they had a leg up. Duda had been lead architect for Pelli on the Bank of America tower across the street from the site for the competition’s million-square-foot project. So when they met with Cousins and former Bank of America CEO Hugh McColl, their reputation preceded them. “Cousins looked across the street and said: ‘Your work speaks for itself,’” Duda says. “We made the presentation, and we won.”

Two years into that project came a second competition, for a tall building in Atlanta, and next, a tower for Austin. Over the past 15 years, the firm began to focus on opportunities in the Triangle. “There are three reasons for local work,” says Paine. “We don’t have to spend a lot of time on planes, it’s great to see the building when it’s completed, and we can point to it and people will know it’s our work.”

Designing The Dillon
The Dillon is a project initiated by developer John Kane, who hired Duda|Paine 10 years ago for work in his suburban North Hills mixed-use development. But before he did that, Paine says, Kane called builder Tommy Holder in Atlanta to ask about architects there capable of designing a tower. “Why come to Atlanta?” Holder asked Kane. “You’ve got one of the best firms there in Durham.”

The Duda|Paine relationship with Kane has evolved fruitfully: along with The Dillon, it’s spawned two North Hills towers. “Turan has a unique way about him to explain design and get people to buy into his vision,” Kane says. “Jeff is a practical guy, but he’s creative as well, and they complement each other.”

The assignment for The Dillon was multifaceted. Already under way was Clearscapes’ adjacent Union Station, in need of 300 of The Dillon’s planned parking spaces. The client wanted to maintain a brick façade from the century-old Dillon Supply warehouse, for authenticity and to clad retail space at the base. And there were to be seven stories of offices atop nine levels of parking.
“There’s not a lot of office space, and we needed to hit the rental rate,” says a numbers-oriented Paine. “And it had to be a building with perforated metal panels for the parking, and glass – but not a curtain wall of glass – one that’s less expensive, for a different palette of materials.”

They designed a building that responds to its context and is meant to be experienced in multilayered ways. It’s not a pure, monolithic form with a crown on top. Instead, it’s composed of many elements that form a complex composition. “It’s a painterly or artistic way of looking at the building,” Duda says. “It’s a collection of ideas.”

From Union Station, it makes an impression. The first thing one sees when exiting the train station is a glass tower, its profile narrowing as it rises. There’s a four-story “sky window,” between the 14th and 17th stories, 60 feet wide and 56 feet tall. “It protrudes out, cantilevers out from that surface,” he says. “It will be the thing you remember – the signature of the building.”
Especially memorable is its outdoor terrace with restaurant, nine stories up and overlooking the grid of downtown Raleigh. Because there’s no formal, awe-inspiring lobby at ground level, the terrace does the trick on a much grander scale. “We’re changing that experience,” he says. “You step out of the elevator and – ‘Wow! That’s not what I expected.’”

The terrace blurs the lines between public and private, indoors and outdoors. “It’s a sky lobby, a symbol of the new workspace,” he says. “There’s a new generation in the workforce that’s less about the ceremonial and more about the experiential.” Brad Brinegar, CEO at Durham-based McKinney, can attest to that. Fourteen years ago, he asked Duda|Paine to design a new workspace for the next generation of his advertising agency on the American Tobacco Campus. The idea was to create a destination for the best talent and clients in the industry.

Was it ambitious? You bet. Did it succeed? Absolutely.

“They pushed us, but they were listening, to make our work better – and to make people’s jaws drop, 14 years later,” Brinegar says. “They know how a building elevates life.” For an architect, that’s the grail. And on the terrace of The Dillon in downtown Raleigh, Duda|Paine nailed it – literally and figuratively.