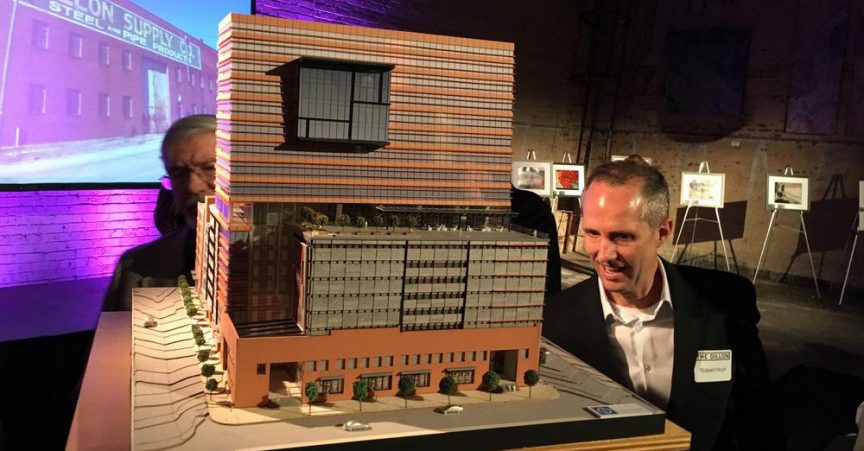 Originally published in the Triangle Business Journal on Jan 13, 2016

The best way to get to know your new neighbors is to throw a good party, and John Kane nearly packed the house with his launch event for The Dillon tower project in downtown Raleigh on Tuesday night.

More than 400 people were invited inside the vacated Dillon Supply warehouse building at 223 S. West St. to see the new building model and learn about the 17-story office, apartment and retail project that will soon be rising at the site.

Neighboring artists and restaurants were invited to show off their wares. The cavernous building had been turned temporarily into a nightclub with DJ music and catering stations for restaurants within two blocks, including Fiction Kitchen, The Pit, Humble Pie and Tuscan Blu.

Even Gov. Pat McCrory joined in the celebration. “This is cool … and cool sells,” McCrory said.

The first demolition permits for the $150 million building project were issued this week, and construction crews will begin scraping the site in the coming weeks.

Kane, chairman and CEO of Raleigh-based Kane Realty Corp. that’s leading development of The Dillon, says many of the warehouse building walls will be kept intact and the railroad track spur that leads inside the building will be incorporated into the ground floor.

“We’re going to preserve what we can reuse,” he said.

Kane also announced at the event that the project has signed its first major office tenant. The Stewart engineering firm will be relocating its headquarters from another downtown building to The Dillon taking a full floor of about 27,000 square feet.

Willy Stewart, chairman and CEO of Stewart, says the decision was easy. “We want to be part of something that’s great, and these guys are doing great work.”

Stewart is also the civil, structural and landscape engineer for the two-building project designed by the Duda Paine architecture firm in Durham. JDavis Architects in Raleigh is leading in the design of the apartment elements.

Kane Realty and its joint-venture partner in the project, Maryland- based Federal Capital Partners, completed the purchase of the 2.5-acre Dillon Supply site in downtown’s Warehouse District in December. The group bought the property for nearly $13.9 million, according to county records.