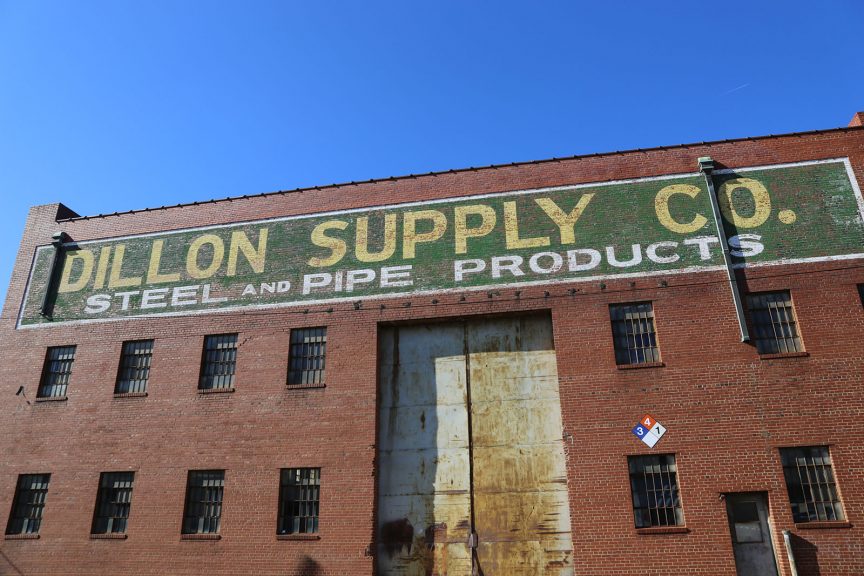 Originally published in the News and Observer on August 17, 2016.

Work has begun on a 17-story office building on the site of an old Dillon Supply Company warehouse downtown, but the warehouse hasn’t completely disappeared.

The outer brick walls of part of the building have been preserved, along with the industrial supply company’s name painted on one side. A steel frame, anchored in concrete pads and bolted to the 40-foot-high walls, will hold them in place while workers build the new concrete-and-steel building inside.

It’s an effort by the developer, Kane Realty, to preserve a flavor of the Warehouse District in a new $150 million complex of offices and apartments that it calls The Dillon. It would have been easier and cheaper to demolish the whole warehouse, but CEO John Kane says the added $750,000 to keep the walls and other elements of the old building is worth it.

“There was consideration on the financial front, but preservation and history was more important,” Kane wrote in an email. “We wanted to save as much of the walls and signs as was feasible.”

Raleigh’s Warehouse District is becoming a place without actual warehouses. Many of the low brick buildings that went up near the railroad tracks when the nation’s freight went by train have been turned into restaurants, offices, nightclubs, an art museum and even a church.

And with growing demand for places to live and work downtown, developers are looking to the district to build multistory buildings that will change the feel and character of the area, even if some elements are preserved. The steel and glass building that houses 600 workers for software company Citrix rose within the brick walls of another Dillon Supply warehouse on West Hargett Street.

City councilwoman Kay Crowder, whose vote was critical for the rezoning Kane needed for The Dillon, says she’s pleased to see the Dillon Supply walls still standing as construction gets underway. As a Raleigh native, she thinks it’s important to preserve a bit of the city’s past without standing in the way of progress.

“I think it’s important just culturally to try to preserve a little of your history,” Crowder said. “Today, good designers can take old materials to repurpose them and breathe new life into them.”

The Dillon will incorporate other elements of the old warehouse into its design, says architect Matt Petr, the project leader for the Durham-based firm Duda Paine. A railroad line that ran through the warehouse will be put back, bisecting the retail spaces on the ground floor. And steel beams and an overhead crane used to hoist steel in the building will be used to create a trellis over a plaza on the west side of the building, opposite the Union Station transit hub.

“We’re trying to create a complement to the Union Station plaza,” Petr said.

Most historic preservationists are ambivalent about saving facades and pieces of old buildings, says Myrick Howard, president of Preservation North Carolina, a statewide advocacy group based in Raleigh.

The contrast would be the restoration and repurposing of tobacco warehouses and the American Tobacco Company complex in Durham, which have made a huge impact in revitalizing the city, Howard said. “The tigers live there,” he said. “It’s not just a rug.”

But Howard acknowledges that the old Dillon Supply warehouse was not a building of great historical importance worth fighting to preserve. The elements that Kane Realty has saved will help tell the story of the Warehouse District in the future, he says.

“It’s not the full-blown homage to the past,” Howard said. “But it at least reminds people of what was there and the heritage of it.”

Dillon Supply built the warehouse in the 1950s or early 1960s to house its boiler division, says Eric Dillon, grandson of C.A. Dillon Sr., who founded the company in 1914. The company loaded and unloaded boilers from a railroad line that once led to Raleigh’s old Union Station passenger depot on Nash Square a block east.

The company later used the building as a steel warehouse and then for its forklift division, up until it sold the block to Kane Realty’s financing partner late last year for nearly $13.9 million.

Eric Dillon, a Dillon Supply vice president and the only family member still involved in the business, think it’s good for the city that pieces of the city’s history will be preserved in The Dillon. He thinks his grandfather would approve.

“I think it would be kind of cool if he could come back for just one day to see that his legacy lives on,” he said. “I just wonder what his expression would be.”