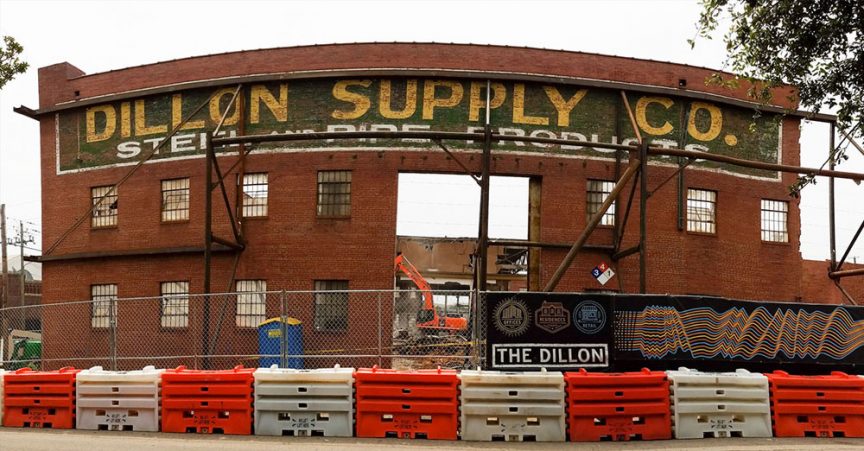 Originally published on RaleighAgenda.com on Jul 11, 2016

For the past few months, demolition has taken place at the Dillon Supply Company building in downtown’s warehouse district. The warehouse has been scraped away slowly and is now ready to become a part of Kane Realty’s project called The Dillon.

At this point, the demolition has basically stopped and what remains will be incorporated into the new mixed-use project.

All that remains is the southern wall of the warehouse, the wall facing Martin Street and parts of wall along Harrington and West Street. The iconic sign is still there, jailed up for now behind steel braces to reinforce the wall during construction.

Towering above will be the 17-story office building that should inject new activity to the district. Apartments are planned for the rest of the development as well as the first public parking deck to directly serve nearby Raleigh Union Station, currently under construction, and the rest of the Warehouse District’s restaurants, shops, and art dealers.

The former warehouse had no sidewalk presence. The Dillon will change all that with 40,000 square feet of retail and restaurant space, primarily along Martin Street.

With a planned art installation along the side of the building, a skyhouse lobby, and rooftop restaurant The Dillon is one that is sure to follow.